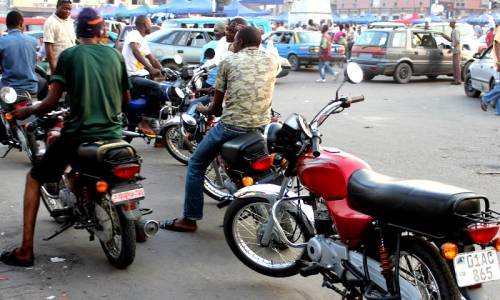 “Immediately they saw that the blood did not stop, they abandoned him and ran inside their station.
Residents of Okota in Isolo local government area have accused men of the Lagos state police command of killing Aliu Rafiu, a motorcycle rider in the area.
Information show that Rafiu, was on his way to work in the early hours of Wednesday when he was killed for refusing to pay the police men a bribe of N100.
The video of the incident has since gone viral.

A resident, Adebayo Ishola, explained that only commercial tricycle riders were allowed to ply the road where the victim was found.
He explained that because commercial motorcyclists were banned from using the road, policemen usually extorted money from those who plied the road.
Ishola said Rafiu had been chased and caught by two policemen namely; Monday, and Ekene, as the former hit the victim with a baton on the head.
Ishola said: “This morning when we saw the body on the road, there was another motorcyclist at the scene. The motorcyclist said two policemen, Monday and Ekene, were responsible for the man’s death.

“Another person confirmed the presence of Monday at the scene. They were trying to extort money from the rider after he was apprehended. Monday used the butt of his gun to hit him and he fell. Blood started flowing from his head.
“Immediately they saw that the blood did not stop, they abandoned him and ran inside their station. I heard a motorist who drove behind the motorcyclist saying Monday and Ekene were the culprits”.
Another witness, who identified himself simply as Shola, said he was on his way to work when he witnessed the scene.
Shola said: “I was trying to board a vehicle when I saw the motorcycle rider in a pool of blood. I mmediately alerted the police to the scene because no policeman was outside at the time. When I told them that there was someone on the floor, they rushed outside, put him inside their vehicle and rushed him to hospital”.

In the viral video, a policeman is seen approaching a motorist, who claimed to have witnessed the incident to query him on what happened.
“The okada man was going on his own. He chased him; yes, he chased him. I know him (the policeman). He is tall, dark,” he said before driving away from the scene.
The man filming the video could be heard cursing the police as he announced the area where the incident happened.
Rafiu was confirmed dead at the Isolo General Hospital.
However, the state Police Public Relations Officer, Bala Elkana, in a statement, said the police had no hand in the death.
Bala said: “The attention of the Lagos State Police Command has been drawn to a video being circulated on the social media in respect of a commercial motorcyclist said to have been chased to his death by a police officer. The allegation is false and a complete misrepresentation of the facts.

“On Wednesday, May 8, 2019, around 6am, the police at the Ago-Okota Police Station heard a loud sound a few meters away from the station and rushed out to ascertain what was going on. They found a motorcyclist in a pool of blood with his motorcycle on the ground. The victim was taken to hospital, but eventually died.
“On inquiries from eyewitnesses around the scene, it was gathered that the motorcyclist was involved in a fatal crash with a vehicle along the Ago Palace Way.
“An eyewitness, Mr Adedayo Benson, stated that this morning (Wednesday), he was standing in front of the Century Hotel and saw the motorcyclist, who was riding at top speed, ram into a road bump and suddenly applied his brakes but was hit by a Camry car driver, who was behind him.
“The driver of the Camry ran before the arrival of the police. Investigation into the accident is ongoing to track and apprehend the driver of the car with a view to bringing him to justice”.