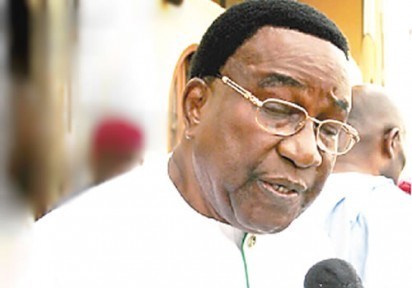 ENUGU – FORMER governor of old Anambra state, Senator Jim Nwobodo has called for Igbo presidency in 2023, saying “Nigeria will not know peace until an Igbo becomes President”.
Senator Nwobodo made this assertion during his 79th birthday celebration which took place at The Base Event centre, independent layout Enugu.
Nwobodo, also called on Ndigbo to come together and support any body that is doing well to represent us.
He urged the judiciary to discharge their duties with justice saying that it’s only the judiciary that can prevent the country from collapsing.
The Chief celebrant, Senator Nwobodo said that Ugwuanyi has actually brought everybody together in peace.
Speaking at the event, the President General of Ohanaeze Ndigbo, Chief Nnia Nwodo, described Gov. Ifeanyi Ugwuanyi of Enugu State as a governor whose leadership knows no boundary.
He said that Ugwuanyi does not discriminate among political parties because he treats everybody equally.
Nwodo who was the chairman of the occasion, said that Ugwuanyi would not say because one is not a member of his political party and for this reason will discriminate against him to deny him his due.
He said that since Ugwuanyi came to power, he has united the people of the state and this has brought peace to the state.
“Ugwuanyi has no boundary. We have never had such love that exists in Enugu State today,” he said.
According to Nwodo, Ugwuanyi even tars roads that lead to his political opponents roads and urged future governors not to return Enugu to the former days when people will not attend a funeral ceremony because of party leanings.
He said that even in the day of Nwobodo as a governor, Enugu was not living in peace as they are living today.
“The next governor should not remind us of old days of acrimony or animosity,” he said.
The ceremony attracted top shots such as former Minister of Culture, Frank Ogbuewu; Chief Dubem Onyia, former Minister of Foreign Affairs; Chief Osita Chidoka, former Minister of Aviation; Barth Nnaji, former Minister of Power; Chief Ekweremadu, Deputy Senate President; Speaker of Enugu State House of Assembly, among others
Facebook Comments
Loading...
Related Topics:NdigboNewsNigeria
Up Next