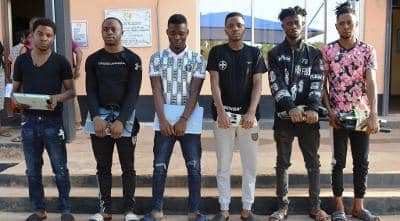 An Angry Nigerian lady has taken to social media to lampoon Nigerian internet fraudsters otherwise known as yahoo boys.
The Lady tagged these boys as ‘mere noisemakers and they cash out peanuts compared to scammers in the Western World’.
In her opinion, she wrote that Yahoo boys are the reason why the country is getting a bad name in the international community. She believes they earn little and go around the city making noises and giving the country undue attention.
 

Suspected Yahoo boys caught in Ibadan
Her post reads ;
The first ever yahoo guy,scammed bank of America running into millions of USD
Who remembered liberty reserve? The guy was caught with 50m USD raw cash
The biggest scam in ICO was 600m USD..and no Nigerian was there
The biggest scams,with huge funds,no Nigerians were there,so why do the world see Nigerians as corrupt and scams? I’ll tell you
A yahoo boy scams a sugar mama white lady of just 20,000$ and all his street people will know he’s a yahoo boy
Even Nigerian musicians who are yahoo boy use it to sing…flaunting our stupidity to the world..
The 17yr old who wokeh bank of america,used money to line his bed as foam,it was his then gf that reported him..
He was employed to build firewalls for big companies…
He was worth millions of millions of USD,yet nobody in his area knew about it..

There are instances of hedge funds scams running into billions of euros instigated by Europeans guys .
The list are inexhaustible yet we use our petty scams and noise making to chop bans from many legit sites world wide…we are our own problems!!!
Conclusion
Nigerians are noise maker
Do you know why they’re killed in south Africa?
You go person country,buy latest cars,oppress them,collect their gfs,same thing they’re doing in Europe,thats why south Africans are serving then jungle justice every day..
Empty barrels makes the loudest noise
Nigerian yahoo boys make una go siddon jare…
Mtswwwwww 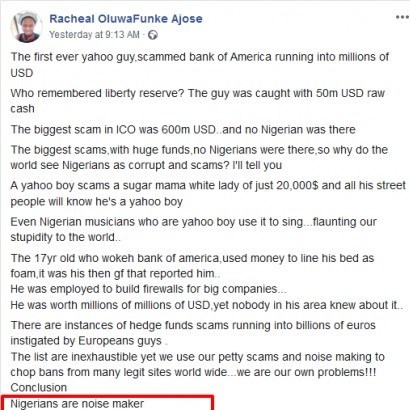 I regret ever joining APC, I Wish I Had Listened To Nnamdi Kanu, – Gov Okorocha Cries Out Says 'Oshiomhole Ask Security To Send me Out Of His Office' (Video)