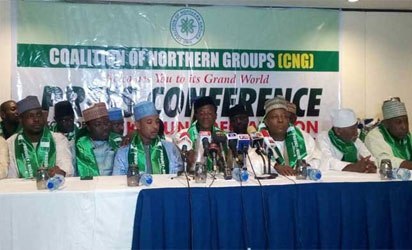 ABUJA – AS President Muhammadu Buhari prepares to be sworn into office for another four-year term after his victory in the 2019 presidential election,a northern group,Arewa Youth Assembly and some civil society groups have tasked him to ensure inclusive governance and even distribution of appointments.
They told the president not to repeat the mistake of his current administration which they noted,did not consider the interest of some geopolitical zones for key appointments, especially in the security sector.

Speaking on behalf of the groups at a rally held at the Unity Fountain,Abuja,Thursday, Speaker,Arewa Youth Assembly,Mohammed Danlami,said “recent events in the nation signal a steady reversal of the expectations of the founding fathers of Nigeria that this shall be a country based upon the principle of liberal democracy in which citizens shall have freedom of choice and be treated equally.”
According to him,”What the nation requires is mature nationalistic leadership that will accommodate all Nigerians and provide an all inclusive fair treatment for all the divergent groups in the country on the basis of equality and fairness to everybody.”
Reading a prepared speech before newsmen at the event,Mr Danlami said:”For Nigeria to survive, thrive and flourish in peace and unity, the nation must stand solidly upon the principles and practice of liberal democracy.”

“Certain decisions and proposals that are on the table since 2015 require reconsideration in the overall best interest of the nation,”he insisted.
The text read in full:”It is with an unflinching yearning for national unity and a deep sense of fervid patriotism that the Arewa Youth Assembly alongside several renowned Civil Society Groups have converged here on the grounds of the Unity Fountain here in Abuja.
“In 1999 after many years of military rule, Nigeria returned to democracy, there was hope in the nation that liberty and freedom of choice that will ultimately translate into justice, equality and for all fairness shall certainly produce prosperity and strengthen the unity of the divergent groups within the nation.

“Unfortunately, recent events in the nation signal a steady reversal of the expectations of the founding fathers of Nigeria that this shall be a country based upon the principle of liberal democracy in which citizens shall have freedom of choice and be treated equally.
“There are worrisome signals that Nigeria is sliding dangerously down the destructive slope of injustice, oppression, discrimination and disregard for other region.
“Without a doubt, there is no greater time than this for the clarion call of national unity and thorough integration to be emphasized upon by all true patriots than now.
“We are no strangers to the inescapable fact that a number of fiendish anti-national elements have cashed in on several factors to sow seeds of discord and disunity all in a bid to attain some political points and this at the detriment of our collective as a nation.

“We are all conversant with the sporadic accusations and tirades thrown at President Muhammadu Buhari over appointments made during this first tenure.
“It should be noted that the purveyors of these accusations did not mean well for Nigeria as a whole neither did they seek to protect the interest of the regions they claimed to be agitating for.
“The resultant effect was just bad publicity for Mr. President and continued acrimony among brothers from diverse parts of the country.
“Enemies of our collective progress thus easily folded their arms and watched while their negative grand plan prevailed.

“What the nation requires is mature nationalistic leadership that will accommodate all Nigerians and provide an all inclusive fair treatment for all the divergent groups in the country on the basis of equality and fairness to everybody.
I
“This need for equality and fairness is underscored in our old National Anthem which states “though tribe and tongue may differ in brotherhood we stand” the prayer in the last verse sums up the yearning of the founding fathers of the nation, “o God of all creation, grant this our request. Help us to build nation where no one is oppressed”.
“For Nigeria to survive, thrive and flourish in peace and unity, the nation must stand solidly upon the principles and practice of liberal democracy.
“Certain decisions and proposals that are on the table since 2015 require reconsideration in the overall best interest of the nation.
“As we approach the evenings of this tenure and are set for the commencement of the second tenure, we cannot but lend our voices to call on President Muhammadu Buhari to ensure that enemies of our collective forward voyage as a nation are not given any excuse to embark on their adversarial stock in trade.

“It is on this note that we herein use this medium to call on Mr. President to ensure the even distribution of appointments in the next government that will be formed post May 29th.
“Appointments in the Security Services, Ministerial Positions, Headship of Agencies and all such related appointments which require the intervention of the President.
“We are not unaware of the fact that those who thrive at dissent and national division are already spinning their yarn of misdirection and calling on President Muhammadu Buhari to make appointments based on the votes he got from the respective States and Regions.
“This position is totally antithetical to national integration, cohesion and unity. We therefore call on President Buhari to discountenance such negative calls that are not in the interest of the nation and ensure that these appointments are distributed equitable across the geo political zones on the basis of merit.
“An even spread of appointments is the surest key to national unity as this will silence the voice of those calling for secession.

“President Muhammadu Buhari has demonstrated in several instances that he is the father of all Nigerians, his good intentions have been abused by a handful in the past but this coming era should give no room to such fellows who will want to tarnish the very pristine, patriotic and altruistic good image of the president. The coming tenure afford President Buhari an opportunity to wield the defining masterstroke that defined such fadeless and timeless leaders as Nelson Mandela of South Africa and Mahatma Ghandi of India.
“Across the North and South, those who have pitched their tents with truth and rectitude will come to the singular agreement that President Muhammadu Buhari by his intents, words and actions is the father of modern Nigeria.
“He is the gateway to the emergence of the new and greater Nigeria which can only be attained on the pedestal of national unity and uncompromised integration of the various component ethnicities of our dear nation – Nigeria.
“Today our nation’s tolerance is on trial, injustice and lack of fair-play have given birth to state induced violence and a sort of clamour for identity preservation self expression and the reshaping of distributive politics have generated much heat.

“We thank those who have contributed positively to the development of our fatherland, Nigerians are unanimous on one verdict: our great nation has not fulfilled its potential and our realities are far from our ideals.
” It is time for Mr. President to build a modern Nigeria; we want a political system that encourages the people to contribute to the development of our fatherland.
“We call on Mr. President to place the nation first and above all other interests. Those that approach the plough board of national service with religious, regional or tribal sentiments should be shoved out the window.
” No region will be happy if they are consigned to the backwaters of our national leadership affairs. Inclusive governance on the other hand will unite the whole nation and thus no region will fold her arms and watch while crisis engulfs another region as we will see ourselves as one indivisible entity. Equity and equality is the surest tool for nation building and National unity.

“On a united front we will more easily be able to combat the challenges that confront us as a nation particularly the challenge of insecurity that brings in its wake underdevelopment and poverty. It has been widely asserted and truly so that an eye for an eye will only leave us all blind.
“The task is bounden on the shoulders of Mr. President to ensure that every such factor that militates against national unity should be suppressed, extricated and exterminated from our line of service.
“Finally, we use this medium to call on all Nigerians from all ethnicities, regions and religions to give the good government of President Muhammadu Buhari the hundred percent patriotic support needed to steer the ship of national progress.
If Nigeria succeeds it will be in our collective interest, we do not have any other nation and thus we should desist from fanning the embers of national disunity. United as a nation, we shall rise to take our pride of place in the comity of nations.”
Source: Vanguard News

We don’t Want 'Presidential Mandate' In 2023, We Need Biafra/Igbo Freedom

I Went through hell, troubles for 8 years just to develop Imo — Okorocha Cries Out