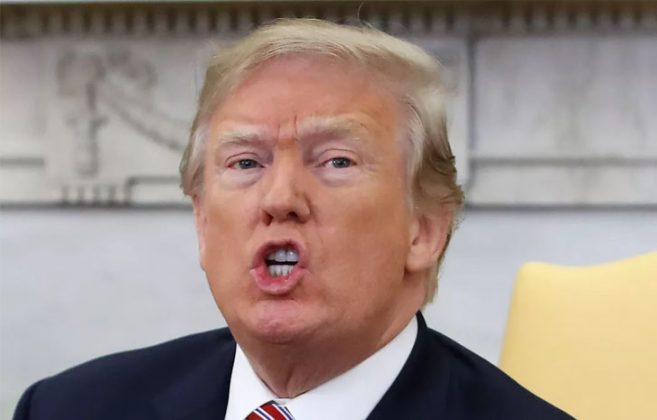 Donald Trump has denied he called Meghan Markle “nasty”, even though his interview was recorded.
In a tweet posted the day after the interview was published, he said the quote was “made up by the Fake News Media”.
“I never called Meghan Markle “nasty”,” he wrote. “Made up by the Fake News Media, and they got caught cold!
“Will @CNN, @nytimes and others apologize? Doubt it!”
Mr Trump reportedly branded the Duchess of Sussex as “nasty” after hearing she made critical comments about him during his 2016 election campaign.
When she was working as an actress Ms Markle described the US president as “misogynistic” and “divisive” and said she would be tempted to move to Canada if he won the US presidential election.
Asked about her comments, Mr Trump told The Sun: “I didn’t know that she was nasty.”
Mr Trump’s comments come ahead of his official state visit to the UK next week alongside his wife Melania and four adult children.
The US leader will be welcomed in the Buckingham Palace garden, before a state banquet in the palace’s ballroom on his trip which begins on Monday.
He is expected to meet the Queen, Prince Charles, Prince William and his wife, Kate, the Duchess of Cambridge.
Support free-thinking journalism and subscribe to Independent Minds
Prince Harry will also meet the president, but Meghan will not be joining as she is currently on maternity leave with their son Archie.
The Duchess of Sussex has previously criticised Mr Trump and expressed support for his rival for the presidency, Hillary Clinton.
“You’re not just voting for a woman if it’s Hillary because she’s a woman, but certainly because Trump has made it easy to see that you don’t really want that kind of world that he’s painting,” she said in a 2016 interview on The Nightly Show with Larry Wilmore.
Source: Independent.ng
Facebook Comments
Loading...
Related Topics:ForeignNews
Up Next

"You're too dull, Take action against herdsmen, Boko Haram before they finish killing Our people" — Aisha blows hot, tackles Buhari over insecurity