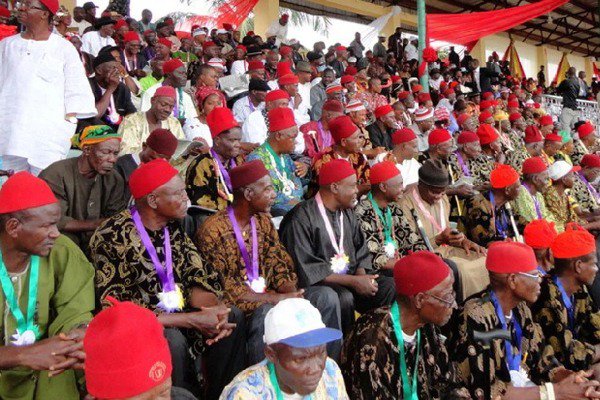  
The Ohanaeze Ndigbo Youth Wing, OYC, has dissociated itself from the calls for President Muhammadu Buhari’s resignation.
Ohanaeze had through its Deputy National Publicity Secretary, Mazi Chuks Ibegbu said Buhari owed Nigerians explanation about his trip to Saudi Arabia, for attending the Organization of Islamic Committee’s meeting barely 24 hours after he was sworn-in for a second term in office.
Why immediate attendance of Organisation of Islamic Cooperation, OIC, meeting in Saudi Arabia a day after his swearing in? Mr President Buhari owes Nigerians that explanation.
“This is a secular country and a leader that wants to be a mullah or fanatic is free to resign rather than plunge us into a religious crisis,” Ibegbu had said.
Reacting on Monday, the OYC through its President-General, Mazi Okechukwu Isiguzoro said the group was amazed by such resignation call, describing it as “a rhetoric capable of plunging the nation into a religious war that will consume Igbos living in the North.”
“We disassociate ourselves from any call for the resignation of President Buhari few days after his swearing in, and urge those behind the call to have a rethink, and stop using Igbo platform for personal vendetta against the Presidency.
“We should be forming alliances and building bridges across the Niger, than creating enmity with predominantly Northern Muslims, by calling on President Buhari to resign on religious grounds. This amounts to fueling religious crisis capable of putting the lives and properties of Igbos living in the North under threat and unnecessary tension.
“We call on Vice President Yemi Osibanjo to as a Pastor, douse all fears by inviting the Christian Association of Nigeria and the PFN, and assure the Christian community that in a Secular Nation like Nigeria, everyone is protected,” Isiguzoro said in the statement.
Facebook Comments
Loading...
Related Topics:NdigboNewsNigeria
Up Next