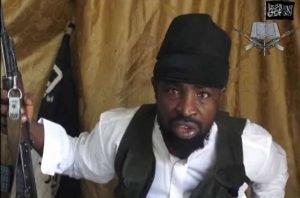 Abubakar Shekau, factional leader of the Boko Haram sect, has mocked the Nigeria and its national pledge.
He called it “shirk” which in Islam means the sin of idolatry or worshiping of anyone or anything besides the singular God.
In excerpts posted on Twitter on Tuesday, Ahmad Salkida, an investigative journalist close the sect, said Shekau was seen in the video clutching an AK 47 rifle as he read a prepared speech in Arabic about the doctrines of the insurgent sect.
Sakilda wrote: “The factional leader of Boko Haram that have been weakened by an internal feud that led to the emergence of another faction in 2016 and persistent military campaign by the Nigerian Army and the Multinational Joint Task Force appeared to have impaired eyesight as he struggled to read his group’s ideology in Arabic, while intermittently reciting Nigeria’s National pledge in English, which he repeatedly said was an act of Shirk.
“The 35 minute long speech in Arabic, according to analyst may be targeted to the international jihadi community, and not the local audience in the #LakeChad region because #BokoHaram have been made a pariah terror group, following feuds between Shekau and several warlords that gainsaid his more extreme ideology, especially the use of women and children as suicide bombers in Muslim places of worship, Internally Displaced Persons camps and markets.”
This development is coming days after Lt Gen Tukur Buratai, the Chief of Army Staff, declared that Boko Haram has been defeated.
According to him, Nigerian military is now fighting an international criminal gang known as Islamic State of West Africa Province (ISWAP).
Facebook Comments
Loading...
Related Topics:GossipNewsNigeria
Up Next

"Abuja residents are evil, they didn't vote for me" – Buhari torments FCT Occupants