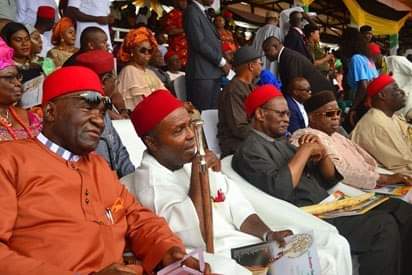 I don’t know if you all are aware that it is the undeniable duty of the elders to protect the younger generation and make their lives free, secured and successful. The drift between the elders and the youths in Igbo land has proven that the elders of today have lost touch with self preservation.
I still know that it is the elders of today that confronted the genocidal North and West in 1967/70 and made sure we are alive today. All these they did without enough food and weapons. Then I am forced to ask, what actually happened? Is it the fear of previous defeat, or are they still hanging on the Gowonic lie branded ‘No Victor And No Vanquished’? Could it be that they are protecting this maxim without knowing that the war never ended?
The war is still on, and the enemy still fight to vanquish their children.
Is that not why Igbo land is still under attack both economically, socially and politically? Those that joined hands together to fight and annihilate us in 1967/70 are still working hard to put us down. They have made sure we enjoy no railway, no international airport and no working seaport, yet the elders in Igbo land remain silent and unperturbed.
Nevertheless, I was surprised when I heard that Ohaneze Ndi Igbo asked Ndi Igbo to be vigilant and prepare for self-defense against Fulani herdsmen. Since then I have been lost in thought. I have filled myself with lots of unanswered questions. I asked myself questions like:
With what will Ndi Igbo defend themselves against Fulani herdsmen- Sticks or machete?
Are these same Fulani herdsmen not same terrorists heavily equipped with AK47, killing people and forcefully taking over their lands?
I am forced to ask again. With what do these elders want Igbo people to defend themselves with? Can they in all sincerity answer us?
Ohaneze Ndi Igbo have maintained a suspicious silence as Ndi Igbo suffer in the hands of Nigeria government led by Muhammadu Buhari.
This government has sent operation Python Dance 1, 2 and 3 against peaceful Igbo youths. Soldiers killed lots of youths and had their bodies damaged with chemicals and dumped in mass graves. In all these, Ohaneze kept mute as a perfect accomplice to the criminal caliphate that seeks young Igbo blood to spill.
When the house of a traditional ruler, His Majesty Okwu Kanu’s residence was surrounded by battalions of Nigeria soldiers. They came to kill Nnamdi Kanu, but ended up killing 28 young Igbo men and a Lady, who happened to be Nnamdi Kanu’s cousin. These killings and desecration of the royal seat of a monarch in Igbo land didn’t perturb Ohaneze Ndi Igbo. They said they are representing Ndi Igbo, yet they have no atom of concern  as Nigeria government keeps killing Ndi Igbo. Even the proscription of IPOB was supported by Ohaneze. Nnia Nwaodo even vowed to sabotage every move to restore Biafra. He ignorantly accused IPOB of causing war in Nigeria.
Have you seen why I am suspicious of Ohaneze Ndi Igbo’s call for self-defense? Why pretending to be speaking for Ndi Igbo whereas all their actions and inactions portrays them as the worst enemies of the people? If they truly want Ndi Igbo to activate self-defense, they should as well tell them what to use against the bloodthirsty invaders. Enough of using our people to play politics. They were all here when these government moved to disarm the people, yet they said nothing. Now they want our people to commit suicide. They now want to cause war without providing Ndi Igbo with weapons of warfare. They are now rooting for self defense with mere stones. No! Not again. We won’t be massacred again.
The governors in Igbo land work hard to do the wishes of the Fulani. They keep working hard to keep us all in check for the Fulani. That’s why they see nothing and say nothing as herdsmen keep killing Ndi Igbo. The most annoying aspect of it, is that their northern counterparts keep protecting their own youths who are the real terrorists. Arewa have protected both Boko Haram and Fulani herdsmen. Even Buhari has done same.
But same Fulani seemed to have caged everyone in South East. The Church is silent, the Media works with the evil government, while those that are brave enough to criticise their atrocities are suppressed with impunity.
Before you contemplate on self-defense, please think of what weapon to use. For it is suicidal to confront AK47 wielding terrorists with bare hands. Listen not to people who play with your lives in the name of Ohaneze. They are playing games with your lives. Listen rather to those who understand that for you to successfully confront a jihad, you need an army and weapons. Only then can you successfully defend yourselves and your land.
By Elochukwu Nicholas Ohagi
For Family Writers Press International.
Edited By Paul Ihechi Alagba
Facebook Comments
Loading...
Related Topics:NdigboNigeriaOpinion
Up Next

"Leave me alone, rule Imo people; You're not a lawmaker" – Okorocha Tells Ihedioha