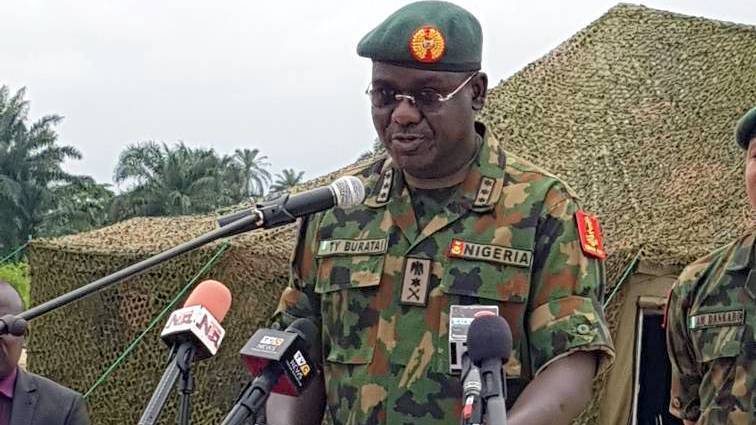 The Chief of Army Staff, Lt. Gen. Tukur Buratai, has blamed recent successful attacks carried out by Boko Haram insurgents on the poor commitment of some soldiers.
Buratai said this on Tuesday at the opening of a five-day leadership workshop for mid-level officers and soldiers in Abuja.
He lamented that there were proven cases of soldiers unwilling to carry out assignments given to them, adding that reluctant troops should leave the service as the army would no longer tolerate them.
Buratai said, “It is unfortunate, but the truth is that almost every setback the Nigerian Army has had in our operations in recent times can be traced to insufficient willingness to perform assigned tasks or simply insufficient commitment to a common national and military course by those at the frontlines.
READ ALSO: Buhari doles out fresh N2 trillion bailout to states
“Many of those on whom the responsibility for physical actions against the adversary squarely falls are yet to fully take ownership of our common national or service cause. And this is the reason why I have always ensured that the promotion of army personnel is essentially based on professional considerations only.
“But we all know that professional capacity is not a sufficient condition to succeed in a task; willingness to perform the task is equally necessary. We all know that leadership is core to military professionalism; hence all military professional courses include aspects of military leadership skills acquisition.”
The army chief added that an effect of modernisation, globalisation and Information and Communications Technology in the last decades had been the “decline in nationalistic enthusiasm.”
“Hence the theme of the workshop has been aptly chosen as ‘Lead, follow or get out of the way,’” he said.
Facebook Comments
Loading...

#EndSars : ”We need total shutdown until this politicians start to answer!” – 2baba Idibia

#EndSars : ”We need total shutdown until this politicians start to...