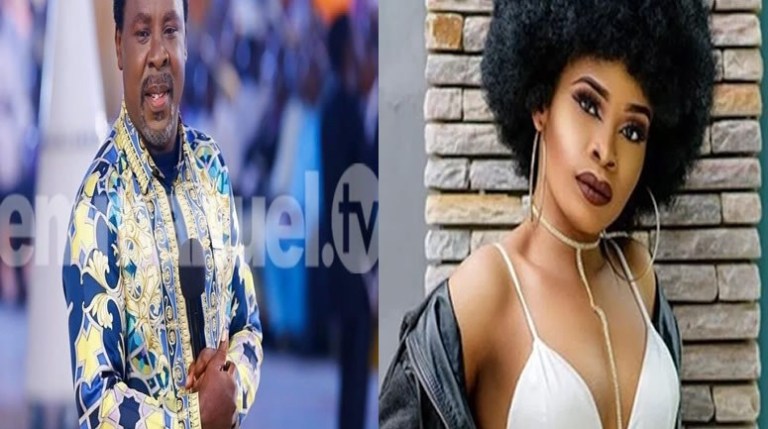 Another Nigerian woman has come out with her painful rape story: How she was raped as a virgin by a so-called ‘Pastor who claims to be a prophet’.
In a tweetstorm on Saturday, Vicki Royce, a singer, and performer, who was born as Victoria Kehinde Bandele 25 years ago, narrated how she was raped by the so-called man of God at a guest house in Ikotun, Lagos on November 2012.

“I was raped as a virgin and the pain felt like hell.. by a pastor who claims to be a prophet,” she wrote.
Although Vicki did not mention any name in her tweets, it was clear who she was accusing: Pastor TB Joshua of the Synagogue Church of All Nations.
TB Joshua: All references by Vicki point to Please read her story

Ikotun, Lagos. Nov 17 2012. I was almost 19. The date, the time, the spot, the circumstances…I’ll NEVER forget.
I don’t want to talk much tbh(to be honest). But even if I shorten this story I’ll always remember the trauma. The deceit. The helplessness.
I went with this my friend and her boyfriend to meet this ‘man of God’.
Well because my choices were limited (in my opinion) back then. And I really needed a miracle to feel better about myself with admission into uni. Amongst a few other issues.

They took me to meet him and he was all fatherly and dependable-looking. I felt at ease, for real. He asked for my parents’ names and I told him. Man of God, who doubts them for no reason?
In short, I was told to come for a special prayer the next week. By myself. But that I should fast that day and break when I’m in the church
The day came,I was fasting. Then I went to the guest house he’d told me to meet him at. Still, find it hard to believe I didn’t suspect ANY ulterior motive. My friends trusted him so it didn’t even occur to me to be worried AT ALL

He wasn’t there but the receptionist, a lady, told me to take the keys to “my room”. That was the first inkling that this was awkward but I wasn’t afraid. I hadn’t been told it was a room thing but I told myself to be grateful that he wanted to respect my privacy.
He came in like an hour after I got there. Welcomed me with smiles and asked if I’d remembered not to eat. I reassured him that I hadn’t. Then he asked if I was a virgin. Couldn’t lie to a man of God. I confessed that I’d never had sex.
Gave me an ‘anointing oil’ and told me to rub it on my pubic area when he leaves the room. It also gave me a white garment to wear after changing.

He came back like 30 minutes after. Told me with a straight face “emi mo ni e”.
Meaning “I own you”.
Huh? Does Kile mean sir? That was my thought. What do you mean by that?
Next thing this man with the Bible told me to undress and lie down. Not kneel for prayers, lie down. I was shy of course but how would I disobey and still get my miracle, my healing?

He brought out his penis, holding a Bible with the other hand and chanting scriptures in Yoruba. Actually saying prayers for me. I could hear. But what’s penis doing with prayer? I was petrified. Yet didn’t want to miss ‘blessings’
Oh, he’d said my grandma put something in me as a kid and it had to be removed for me to make headway. I didn’t even know which of the grandmas. And he now repeated that this was the way ‘it’ could be removed.

The summary he had his way with me while I cried and screamed. Nobody came. Want to believe nobody heard. He kept whispering ” I own you, don’t be afraid. I own you”
He ejaculated and stood up. I was bloody, sticky. He opened the bedside drawer, gave me #200 for transportation. Told me I should give it a week and see the effect of his ‘prayer’. I was crying but told myself it was for a good reason. Never thought I’d give my virginity this way.

I’m a twin. I’m Kehinde. Taiwo is a guy. He and my parents don’t know this story. Our older sister didn’t, till the year. I told my pastor too. I’m much stronger now I think. I’ll not let some random man hurt me for life. I’m #unbroken.”
In her other tweets, she advocated for a brutal punishment for rapists and agonized over many women who have been victims, and who have chosen to keep quiet. She said she was inspired to recount her story by Busola Dakolo, who used a TV interview to tell how she was violated by Pastor Biodun Fatoyinbo of the Commonwealth of Zion Assembly(COZA), now based in Abuja. 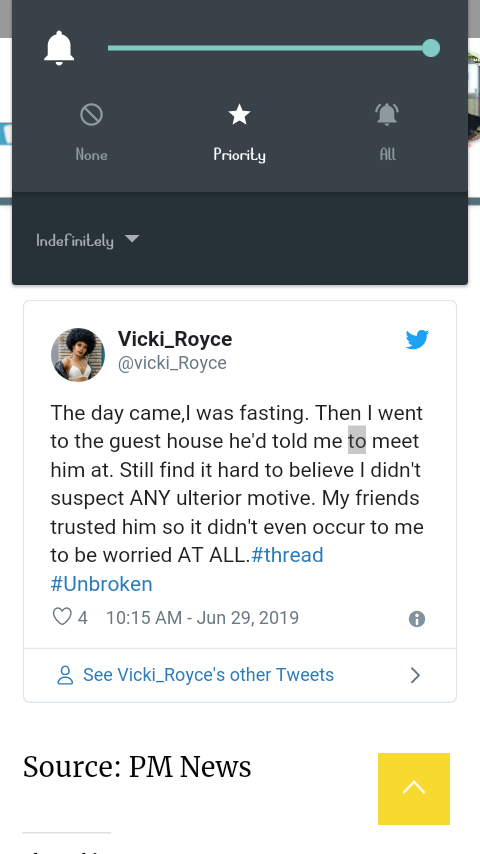 I am sorry to disappoint you, We Don’t Have Any Land For Herdsmen Settlement – Ortom Tells FG