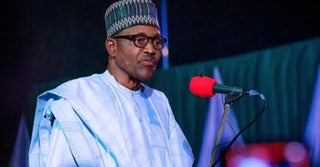 President Muhammadu Buhari has on  Wednesday admitted that his administration failed to deliver on its promises for improved power supply in the country.
Calling on more efforts by Electricity Distribution Companies, the President said the Federal Government would play its own part by improving the transmission of electricity.
Buhari said this when the Oba of Benin, Omo N’Oba N’ Edo Ewuare II, led members of the Edo State Council of Traditional Rulers and chiefs on a visit to the President at the Presidential Villa.
The Oba, who sought the President’s intervention on the power supply situation in Edo State, had described it as a “pathetic situation.”
But Buhari appealed to Nigerians for calm, while urging them to be patient with the Discos to deliver on their mandate.
The President’s  Special Adviser on Media and Publicity, Mr Femi Adesina, quoted the President as saying that though his administration had put in its best to improve power in the past years, especially improvement in gas supplies, the performance was not good enough.
“We are building infrastructure. We are doing our best, but, obviously, our best is not good enough yet”, the Presidency quoted Buhari as saying.
READ ALSO: FG begins interrogation of 2 ex-ministers over $2bn Atlas Mara’s Union Bank shares fraud
“I am pleased that you have taken up the fight against human trafficking and I know the effect of your intervention will be felt beyond our borders,” the President told his visitors.
Buhari spoke on the Benin-Abuja Road project and his administration’s efforts to develop the agricultural sector, “promising that more will be done to diversify and strengthen the Nigerian economy.”
Oba Ewuare II, while congratulating Buhari for winning a second term, prayed God to guide him in picking a formidable cabinet.
He seized the opportunity to call on Buhari to give two ministerial slots to Edo State.
“We pray the Almighty God to help you put in place a formidable team of men and women of proven integrity that will join you to take this nation to the next level.
“Considering that Edo State is the only All Progressives Congress state in the South-South, may we crave Mr President’s indulgence to have two (ministerial) slots,” he said.
Ewuare II added, “Mr President, we as traditional rulers in Edo State are concerned about the crisis between Adams Oshiomhole, the APC National Chairman and Governor Obaseki.
“If this crisis is not resolved now with immediate effect, it may jeopardise the progress of the state.
“On behalf of the good people of Edo State, we kindly appeal to Mr President to use your good offices to intervene and stop this crisis.”
Facebook Comments
Loading...
Related Topics:GovernmentNewsNigeria
Up Next

I am Innocent, Miyetti Allah Lied Against Me – Yemi Osinbajo Cries Out