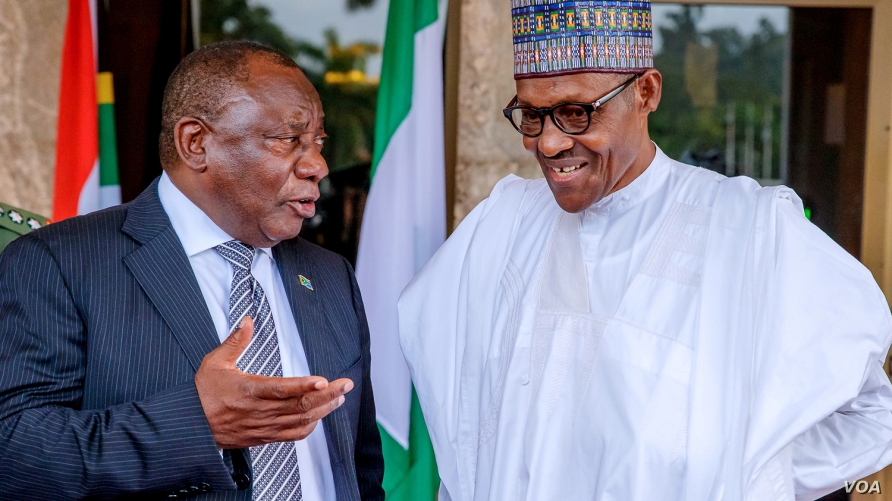 The senate made the call on Wednesday, while asking the South African government to investigate the death of Nigerians who have been killed in questionable situation in the country.
 
 South Africa’s President Cyril Ramaphosa speaks to Nigeria’s President Muhammadu Buhari (R) at the State House in Abuja, NigeriaVOA
The  Nigerian Senate has called on the President Muhammadu Buhari administration to issue travel alerts to Nigerians travelling to South Africa in the light of several questionable killings of Nigerians living in the country.
The senate made the call on Wednesday, while asking the South African government to investigate the death of Nigerians who have been killed in questionable situation in the country, according to a Premium Times report.
Elizabeth Ndibuisi-Chukwu, the Deputy Director-General of the Chartered Insurance Institute of Nigeria (CIIN), was allegedly murdered at Emperor’s Palace Hotel and Convention Centre, South Africa on June 13 where she lodged.
She was attending the conference of the African Insurance Organisation (AIO). Initially, it was suspected that she died of cardiac arrest.
In his lead, Mr Abaribe said the insinuation that she died of cardiac arrest was proved wrong following the autopsy report released on June 20 by the South African Department of Home Affairs which indicated in a death certificate that the death was unnatural and suspected to be murder.
He said the suspicion that she could have been murdered was further confirmed in a separate document issued by the South Africa, Department of Health on June 27 where it corroborated the autopsy report and revealed that she was strangled.
“In a curious twist, the hotel allegedly was reluctant to cooperate with the law enforcement agencies to unravel the circumstances surrounding her death. This is not the first time Nigerians have died in suspicious circumstances in South Africa,” he said. SEE ALSO Odinkalu Calls For Review Of CCTV Footage Of Nigerian Strangled In South Africa7 Comments3 Days Ago
Lawmakers who took turns to condemn the incident stressed the need for prompt investigation. Some senators also suggested that the South African Ambassador and the Nigerian Consulate be summoned for an explanation.
Ifeanyi Ubah (YPP, Anambra) urged the Senate to invite representatives from the Ministry of Foreign Affairs to explain how much investigation has been done. He also asked the Senate to send a “strongly-worded” letter to the South African government seeking details of Nigerians that have been killed in the country.
On his part, the Senate President, Ahmed Lawan, recalled that a similar issue was debated in the eight Senate and an ad-hoc committee sent to visit South Africa with a message that Nigeria as a country was tired of the killings.“We believe that the relationship between the two countries must be better. There must be respect for each other.
“South African businesses flourish more than most Nigerian businesses. South Africans are safe and are protected in Nigeria. There is no need for any South African to take the life of a Nigerian or any citizen. Nigeria is a frontline state. We deserve respect and understanding.
“Our next set of contingents in the Pan-African Parliament must ensure that this issue is brought to the fore. We don’t take the law into our hands in the word of retaliation but we should not be taken for granted. We have taken these killings for too long and we are not going to take it anymore,” he said.
The senate commended the federal government for its prompt action in seeking South Africa’s explanation of the death of Mrs Ndubuisi and urged the government not to relent in its efforts to unravel the circumstances of her unfortunate demise.
The senate also resolved to send a “high-powered delegation to the parliament of South Africa and express displeasure as well as ask their government to do something to stop the killing”.
Facebook Comments
Loading...
Related Topics:AfricaNewsNigeria
Up Next