One of the military sources noted that more soldiers from the South-East, particularly those in the Operation Lafiya Dole Theatre Command, are currently being wooed to resign and join the ESN.

It was learnt that some of the soldiers who resigned did so on the grounds that the ESN, being funded by both international and local donors, has better welfare packages for its officers than the military.

“The Kanu ESN boys are not a bunch of rookies and untrained fellows brandishing guns. I personally know five guys from my hometown in Anambra State who left the Nigerian Army to join the ESN. Two of them were formerly serving in Operation Lafiya Dole, Borno State, before they quit.

“We are being reliably informed that there are other soldiers, particularly of the South-East extraction, who will soon leave for other various reasons and they are likely to be recruited into the fold,” one of the sources said.

Kanu, the leader of the proscribed Indigenous People of Biafra, had recently announced the formation of the Eastern Security Network as a regional force to protect the South-East and South South from banditry and attacks from Fulani herdsmen.

In July 2012, about 356 soldiers in the North-East and other theatres of operation had resigned from the army – some on voluntary retirement, while others cited loss of interest as their reason for disengagement.

The soldiers had written to the army chief, Lt Gen Tukur Buratai, on July 3, 2020, under Reference NA/COAS/001, quoting the Harmonised Terms and Conditions of Service soldiers/rating/airmen (Revised) 2017.

The approval of the voluntary disengagement of the 356 soldiers was contained in a 17-page circular from Buratai, AHQ DOAA/G1/300/92, signed by Brig Gen T.E. Gagariga for the army chief.

Again, this January, another batch of 127 soldiers resigned from the Nigerian Army and are due to leave by May.

Two weeks after Kanu launched the ESN on December 12, 2020, the Nigerian Army on December 30 was reported to have deployed combat helicopters, gun trucks and soldiers to search some suspected forests in the South-East states where the ESN, was said to be camping.

SaharaReporters had exclusively reported that the military search had been ongoing for days, and had no time frame, as the army was acting on “orders from above.”

A video from the drones and hidden cameras believed to be installed by the ESN, had captured the Nigerian Army helicopters and their vehicles and soldiers searching for the camp of the ESN for possible arrests.

“The Nigerian Army that is supposed to fight Boko Haram was seen everywhere searching for the camp of Eastern Security Network team. But they forgot they are dealing with sophisticated men. There are cameras and drones everywhere watching them,” an official had said.

The police force had also stated last week that its personnel had yet to identify an ESN official or camp in the South-East, while dismissing Kanu’s ESN as propaganda and non-existent.

YOU MAY ALSO LIKE
Planning To Get A MBA Degree? Find School List Here.
Online MBA | Search Ads
Looking for Online MBA degree in Garko? Search for results now
Online MBA Degree | Search Ads
Colossal Odds & Massive Wins, Join MSport Today, Make Your First Deposit & Claim A 130% Bonus.
MSport
The Deadliest Snakes In The World
Journalistate
Looking for International Work From Home Jobs? Find Results Now
Work From Home | Search Ads
Moving to Germany to Study Might be Easier Than You Think
Study in Germany | Search Ads
10 Food That Unclog Arteries (Most People Ignore)
Free Hub
Man Kept Hearing Strange Noises Under Driveway, Look What He…
Daily Sport X
People Ignore These Foods That Actually Unblock Arteries
Novelodge
No One Buys These SUVs But They Are The Best On The Market…
Habit Tribe
by TaboolaSponsored Links
READ NEXT

POLITICS
How Fulani Man Shot At Me, Another Brought Out An Axe At Their Leader’s House – Sunday Igboho
45
44 Comments 1 Day Ago

SaharaReporters.com is an outstanding, groundbreaking news website that encourages citizen journalists to report ongoing corruption and government malfeasance in Africa. Using photos, text, and video dynamically, the site informs and prompts concerned African citizens and activists globally to act, denouncing officially-sanctioned corruption, the material impoverishment of its citizenry, defilement of the environment, and the callous disregard of the democratic principles enshrined in the constitution. 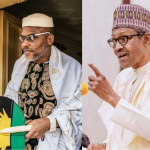 Only Igbos can reject us, Yoruba can’t dictate for us where to stay or not – Northern Elders Says